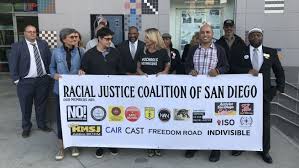 Christian Fellowship Congregational Church UCC has been a formal member of the Racial Justice Coalition of San Diego (RJC) since 2018 and we have played an active role in its “I Can’t Breathe Campaign”. The Racial Justice Coalition started this specific campaign to end all neck restraints used by law enforcement in San Diego.  This movement finally succeeded when a ban on the carotid restraint in the City of San Diego was announced on June 1st, 2020 and then a County level ban was announced on Wednesday, June 3rd, 2020.

Christian Fellowship Congregational Church hosted the first public teach-in on neck restraints organized by the RJC in January of 2018 which included expert panelists Genevieve Jones-Wright, Bishop Cornelius Bowser, Buki Domingos, Robert Branch (a San Diego County Sheriff Deputy used a neck restraint against Mr Branch and he successfully sued the County of San Diego,) and his attorney, Marc Kohan. This work was integral to the mission and regular activities of the Social Justice Ministry at Christian Fellowship, who not only endorsed the “I Can’t Breathe Campaign” but offered to host this teach-in and support all of the activities and organizing work of the Racial Justice Coalition. Being on the right side of history and playing a role in the ending of the barbaric and racist neck restraints that law enforcement have historically used against Black and Brown men has been an invaluable role of the Social Justice Ministry at Christian Fellowship with the Racial Justice Coalition, as well as in our Emerald Hills community in southeastern San Diego.” We invite you to join us for a Contemplative Prayer and Meditation Gathering each Tuesday Morning at 9:45AM (PDT).

We invite you to join us for a Contemplative Prayer and Meditation Gathering each Tuesday Morning at 9:45AM (PDT).