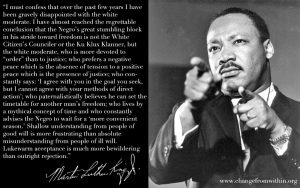 There has been a great deal of scholarship and of study of the sacred texts that are before us this morning. The story of the temptation of our Lord has been embedded deep into our religious subconscious minds. Time and time again we have heard preached in pulpits all across the globe how smooth and cunning the Tormentor is in when approaching Jesus. Time and time again we have heard taught in Sunday School stories from our childhood how smart, charming and flattering the Devil is when seeking to pull Jesus away from his destiny and purpose in life. These stories surround our faith, and upon them have been built monumental theologies concerning the role and function of the demonic in our lives. Rooted and grounded in this very passage of scripture that has been read in your hearing are the religious and philosophical debates that have captivated religious minds and hearts for thousands of years.

The debates begin with the role of the Spirit in drawing Jesus into the wilderness for the very purpose of testing his faithfulness and purpose, and often end by suggesting that the struggles that you are going through
on your job,
in your home,
with your family,
among your children,
in your finances,
in your very own body

…are nothing more than the Devil Testing us and so therefore we need to put not only the test but also the tester under our foot and move on with our with our lives.

What I want to suggest this morning that while this kind of thinking is not necessarily wrong, it is deeply infantile in faith and does not represent the kind of grown up faith that Jesus expects us to have as we grow and mature in mind heart and spirit.

To reduce one’s life to a series of “the Devil made me do its” abandons every single kernel of faith and wisdom that God seeks to deposit in your life. If you are able to walk away from this text this morning, more confident in the role that Accuser plays in the destruction of the world and the breaking down of human ties of love and affection; you have not only misheard the text, but you have misheard the Spirit! “The Devil made me do it” is the product of not only infantile faith, but is abducates every once of personal responsible from your shoulders to the shoulders of a invisible force of evil that, that YES is “roaming the earth—like a lion– seeking whom he or she may devour and destroy.”

These kinds of images often put us on the defense. They keep us moving in a position defensiveness and guardedness instead of from position of power and strength. The problem with the demonic is not so much that evil that is manifested by “her” power, but it is the evil that is manifested in the minds of those who refuse to believe that God’s love has won!

So instead of playing to our offensive strategy that our Lord has already instituted, we walk in the world timid and fearful of being …
Trapped AND Tricked
Cheated AND caught
Duped AND Deluded
Fooled AND hoodwinked
Conned AND Deviled – Over

We end up spending so much time thinking about our defensive strategy that we forget, not only that the BATTLE is of cosmic and epic proportions—but we forget that the battle is not between US and Satan, but that the battle belongs to the Lord and has already been won!

This is why we sing every EASTER; proclaiming through song….:

The strife is over the battle done;
Now is the Victor’s triumph won;
Now be the song of praise begun—AL-le-lu-ia!

Believe it or not, but the greater message of this text is not at all about the Devil testing Jesus, or the test that you and I ought to be preparing for in our ensuring years. No, the higher message of the text is this:

“When we are truly confronted by God’s kingdom, (King calls it a World House, I call it a World of House of Inclusive Love) the temptation is always to see it through the narrow lens of our own interests and aims. Each of the tests revolves around the kingdom of heaven is welcomed for God’s sake—or for the sake of something else. In other words:

The Kingdom of God is realized-enfleshed, in those who, like Jesus, orient their lives toward and not simply around the things that God provides but the World House of Inclusive Love that has established. The test of our time is to not continually look to God like a gaming machine in Las Vegas—

God is not a slot machine.

We must not fall prey to the temptation to ask first, “What’s In It For ME.”
This is the test that Jesus passes, with flying colors and invites us to do the same.

We must not fall prey to measure God’s value by the realization of our own desire, rather than conform ourselves, and our desires, and our values, and our priorities to the Kingdom of God…

It is only after Jesus has show his ability to think less about himself and more about the other that he settles not in the home in which he grew up, but in Capernaum—in Galilee. During Jesus day, Galilee was long known as the place where Gentiles roamed. It was known as a place of spiritual darkness, a place where light had not come. It was a place where that was mixing pot of both Jewish and Gentile cultures—with Gentiles outnumbering Jews 2:1 Capernaum a place the wealthy and powerful abandoned; a place where people felt—in their bodies, the burden of imperial greed and the self-indulgence of a trumped up king (or president).

Jesus’ presence in Galilee—particularly in a place where the Children of God were not only “living in darkness” but “living in the land of the shadow of death” makes us question for whom does this Good News that we possess exist for?

If it is not good, hopeful and transformative news
to those “in darkness”
to those living “in the shadow of death”
to those marginalized by powerful empires
to those held hostage by political systems
to those who are without hope
to those who are vulnerable
to the marginalized
to the oppressed
to the indigenous among us
to children in cages
to elderly
to dreamers who dream of a better world for children & children’s children?
…then for whom is this Good News?

Kings, drunk of power?
Queens, blinded by pride?
Presidents and Dictators, in isolation?
The wealthy and affluent,
The powerful and elite?
The educated and erudite?

…those who benefit daily from systems and structures of inequality and do everything in their seek to prop up the walls of hate on every leaning side?

Dr. King had a vision for our world—a vision that was deeply rooted in the southern, black, Baptist faith that shaped, colored and contoured every aspect of his life.

He stood in the shoes of Jesus, and invited us to life in a World House

To realize, way back in 1968, that “All inhabitants of the globe are now neighbors.”

“All over the world like a fever, freedom is spreading in the widest liberation movement in history.

“Nothing could be more tragic than for men to live in these revolutionary times and fail to achieve the new attitude and the new mental outlooks that the new situation demands.”

“…our very survival depends on our ability to stay awake, to adjust to new ideas, to remain vigilant and face the challenge of change.

“…we must learn to live as brothers (and sister) or together we will be forced to perish as fools.

“Deeply woven into the fiber of our religious tradition is the conviction that men are made in the image of God, and that they are souls of infinite metaphysical value. [Therefore] we cannot be content to see men hungry, to see men victimized …”

King poised the question then, and it remains now, “do we have the morality and courage required to live together as brothers [and sisters] and not be afraid.”

Jesus went to Zebulun and Naphtali to establish a World House of Inclusive Love—love that brings dark places—may we do likewise.

Serving our Lord with fervor and devotion, the women’s ministry include several that support the women in their journey in life.  Women come together in ministry to support the other women of Christian Fellowship, through intentional fellowship and support.

Monthly Fellowship Gatherings are on the 1st Saturday of every Month at 9AM. Our Traditional Worship Service begins at 11:00AM

Click HERE to find out what Dr. Hill will be preaching about this Sunday